I described how Lucy developed the empowerment process in the previous blog. Here I explain how we moved from empowerment to structures and agency. In the next post I will explain how we got from here to wellbeing and social justice.

Because the seven stages of the empowerment process were quite hard to remember, we abbreviated them into three: 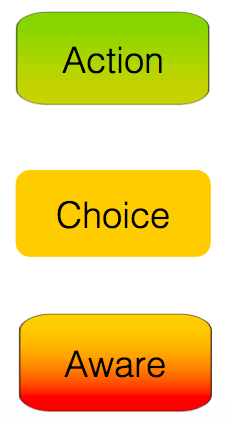 We were aware that this empowerment process did not happen in a vacuum, people did not have complete free will to do what they wanted, they were governed by ‘structures‘. This was an area I had explored in my PhD. Classically there are two views on structures and free will.

One extreme view, called ‘structuralism’ states that people are controlled by and produced by the structures in the world – this portrays them somewhat as robots, fulfilling a determined role in the world. 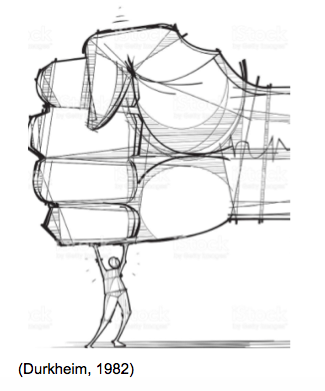 A contrasting view stated that all people have ‘human agency‘ a set of capabilities that involves acting in a way that will bring about a set goal.

In reality the two work together. Structures such as the social norms, rules, customs and laws of our immediate family, peer group, community, region, and country act on us both constraining and enabling us to act in certain ways. We act within these structures making choices, taking actions and trying to achieve what we want. These actions may reinforce or redefine the structures that we live within. Rather than opposing one another in a dualism, structure and agency work together in a duality (Giddens). One academic calls this interwoven mutual relationship ‘morphogenesis’ (Archer, 1995:157). In this model, people are first shaped by the structures in society in a process of social conditioning. From this structured position, they take actions which are social elaborations. These actions effect the structures either reinforcing them (morphostasis) or changing them (morphogenesis). Whilst having some sort of sequence, these are also overlapping activities as shown below from Margaret’s book (1995:157):

This is a significant piece of theory that affects our practice. with this knowledge we can see young people as situated within structures. Joe, for example, was in a family situation full of crime, drugs and alcohol. He had no stability growing up. His peer group were involved in anti-social behaviour and crime. One involved in crime, the criminal justice system labelled him and placed him with other criminals. These structures enabled him to adopt similar behaviours. The word ‘enabled’ signposts a structural encouragement rather than anything set or pre-determined. There was a choice to be pro-social and law abiding, but it would have been a very difficult path to take given the structures around Joe. He would have needed a huge amount of agency to resist them.

As practitioners this allows us to see young people as socially situated, their experiences contextual, shaped but not determined by structures. They make choices, and they may make bad choices due to the structures around them, but this does not make them bad. In this way the structure and agency model allows us to avoid demonising young people or viewing them as passive victims. This opens up a creative space in which the empowerment process works. Aware of structural constraints, leveraging structural enablers, young people realise they have more options than they originally thought. They make choices and commit to a course of action with appropriate support, and this enables them to use their human agency. This not only helps them to achieve what they want, but will also act on the structures themselves changing them.

Lucy and I summarised all of this with the following model:

I am a Professor of Social and Health Inequality and Director of the Centre for Research in Health and Society at the University of Cumbria where I lead research into inequalities locally, nationally and globally. I am passionate about critical pedagogy, empowerment and agency and how they contribute to wellbeing and social justice. To that end I strive towards and support others to develop asset-balanced and person-centred, critically pedagogical practice – quite a mouthful! I also pursue interests in relational leadership, collaborative practice and small acts of leadership. Methodologically I am predominantly a qualitative researcher interested in socially just and authentic methods that enable people to contribute the most. I have a keen interest in evidencing the impact of youth work in ways that contribute to the young person as much as the organisation supporting them, and I work closely with Brathay Trust, the North West Regional Impact Hub for the Centre of Youth Impact. My professional background includes primary, secondary and higher education teaching, youth work, social care, outdoor education, research and higher education all as a practitioner, manager and leader. This experience led to my passion for wellbeing and social justice on a global, national and local scale. This blog is my small attempt to support change in these arenas by sharing evidence and my views in order to increase critical consciousness and leverage action. View all posts by wellbeingandsocialjustice